We don’t get real seasons in Los Angeles, in fact up until a few years ago , I don’t even think we had real restaurants here. We just had fast food joints, hole in the wall places, and celebrity hot spots that served something that looked a lot like real food, but didn’t taste like it. Anyway my point is that despite the coming and going of the holiday season, that brisk winter chill has only just now hit me.

So naturally, I made soup. Which is actually kind of odd for me, because I’m not typically a soup person. In fact, there are only 3 soups I order regularly when going out: miso soup, corn soup, and hot and sour soup. But I didn’t have ingredients for any of those in the house, so I made a potato and broccoli soup instead and it was delicious.

The thing about soups, is that there’s an easy way and a hard way. You can either spend 20 mins or 20 hrs. And if you can spend 20 hrs then you’re soup/curry/chili/stew will probably be freaking amazing. But if you’ve only got 20 mins there are a few tricks you can use to develop enough flavor to get a pretty delicious outcome.

Here’s how I did it with my potato broccoli soup, and yes I’m still not measuring anything, so you’ll just have to use your instincts. 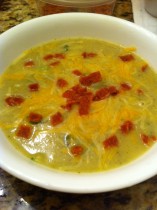 1. Take a Ziplock Steam Bag, toss a couple potatoes and some broccoli in it. The ratios is up to you and your pantry really. But the more potatoes the creamier the soup will be. Don’t cut the potatoes yet, and try to keep as much of the broccoli whole as possible too. I leave on the stalks of broccoli and skin of the potatoes just because there’s no reason not to when they’ve got extra nutrients and flavor. Toss the steam bag into the microwave and heat until potatoes are fork tender.

2. Mean while take a sauce pan, on medium low heat, add butter, chopped onions, and chopped garlic. Remember everything’s going to get pureed later, so as long as everything’s chopped to about the same size so it can cook evenly, the size of the chop really doesn’t matter. Stir often so the garlic doesn’t burn while the onions become translucent.

3. In another sauce pan, heat up some reduced/no salt veggie broth.

4. Chop up the contents of your steam bag, and add them to the sauce pan, turn the heat on low and stir for a min or two just to allow the flavors to muddle a bit.

5. Add some broth into the pan. Usually just enough broth to cover the mixture works well, but you may want to add a little less than that. That way if the soup gets too salty you can just add hot water and you can still control the creaminess.

6. Turn the heat up and simmer. Like I said the longer it simmers the better, but this is a pretty simple soup so some where between 5-15 mins should be just fine.

7. Take the pan off the heat, and use an immersion blender or a regular blender, to puree the soup. But be careful, because when hot stuff splatters it hurts. If you want a thinner soup, add hot water. If you want a creamier soup you can add some parmesan cheese while you’re blending it, or blend it and then put it back into the pan and reduce it further.

8. Season to taste, and top it like you would a baked potato. For me some cheese and veggie bacon.

I was watching cooking channel,  shocker right? Anyway I kept noticing a couple shows commenting on french fries.  Now I’m a big fan of the classics, I think the best way to judge a chef is see how the elevate simple foods. But potato wedges fried in duck fat…wow.

For those of you who don’t speak foodie, let me break it down. Think of the oil from duck confit. ( Duck is cured with salt, herbs and spices for about 36 hours; then it’s washed and dried and placed in a deep pan filled [enough to submerge the duck] with oil. From there it cooks for at least an hour at a very low heat.  ) But that’s the last step. First the potatoes are frenched (cut in to strips ), and soaked in vinegar for 30 mins. Then they’re patted dry and fried once in regular oil, till they’re only half cooked. Then just before you are ready to devour them the half cooked fries are tossed into the pan of confit and fried again at a lower temperature. Basically what you get is really fluffy mashed potatoes on the inside and crispy salt crunch on the outside.

Now obviously those fries featured are rather french in origin, since the french are the ones that confit things like duck and pork. But when it came to the feature on proper chips from the UK…well lets just say it was an epic fail and though they made an effort at it, by putting it next to cod; I don’t understand how they could have over looked the fact that PROPER CHIPS are meant to be eaten with vinegar.

So as a result I decided to try my hand at making crisps (English to English translation: chips are fries, crisps are chips. got it?). And they turned out horribly burnt, so I tried again and the result is what you see below. 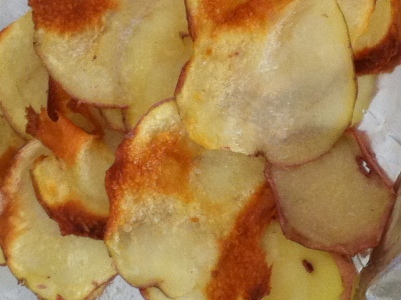 Ya okay I admit it , they’re baked with barely any oil, (some coarse sea salt and obviously a little vinegar)…but they still taste good I promise. Deep frying is delicious but when you don’t have a proper deep frier chances of you being burned are way higher.

Its the same thing I do when I make french fries at home cut the potatoes in to thin slices for crisps or wedges for chips. Drizzle oil and sprinkle seasoning on baking sheet, lay out potatoes, more oil and seasoning on top. And then bake for  10 mins if you have a toaster oven. The crisps YOU HAVE TO WATCH like a hawk, and I’d keep em at 325. But the chips you can do at 375.

In case you’re wondering duck fat fries aren’t cheap or easy to make so it’s not likely you’ll see them that often unless you’re at a gastropub, or a high end burger joint but I’ve got a feeling Umami and Father’s Office might be featuring them soon. 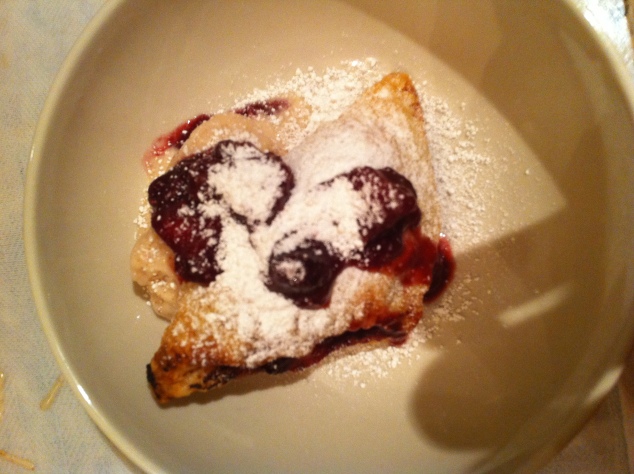 I made tiny pocket pies

My attempt at Julian’s Tarte Flambe 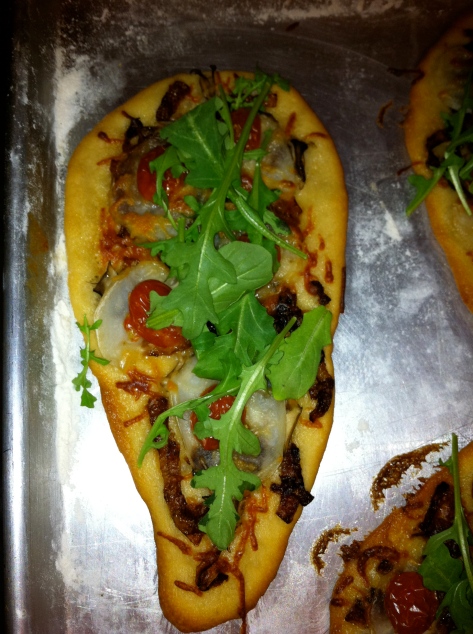 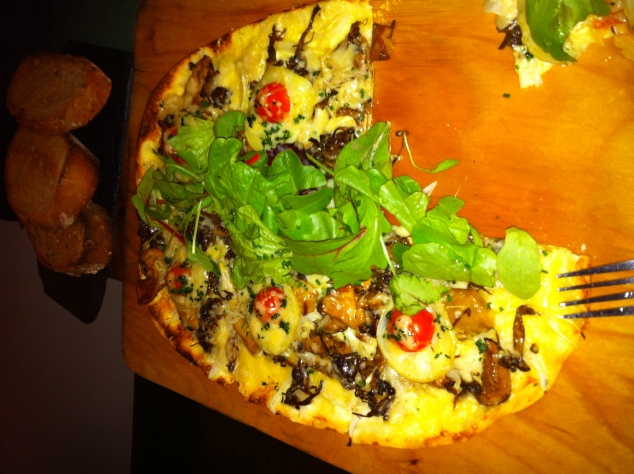 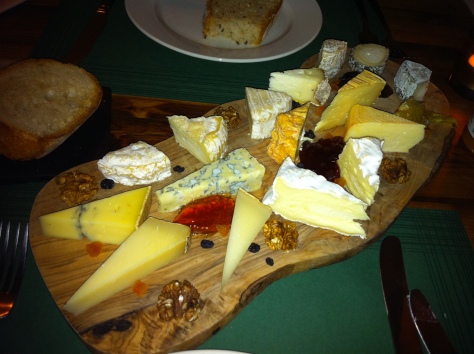 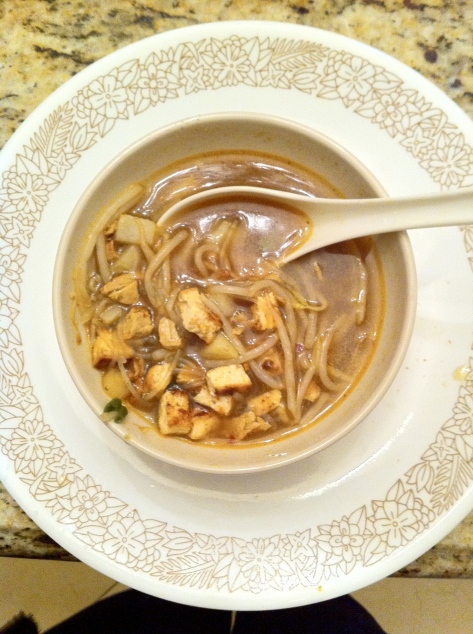 Dini Says
Create a free website or blog at WordPress.com.